Unveiling of the new display cabinet

The MacArthur Museum Brisbane commemorated the 78th Anniversary of the US General Douglas MacArthur’s arrival in Brisbane on 24 July 1942.The Lord Mayor of Brisbane addressed a gathering to unveil a new display case dedicated to the importance of the building and office to the history of Brisbane.A tour of the MacArthur’s office also showed off the restoration work carried out on the timber paneling of MacArthur’s former office. 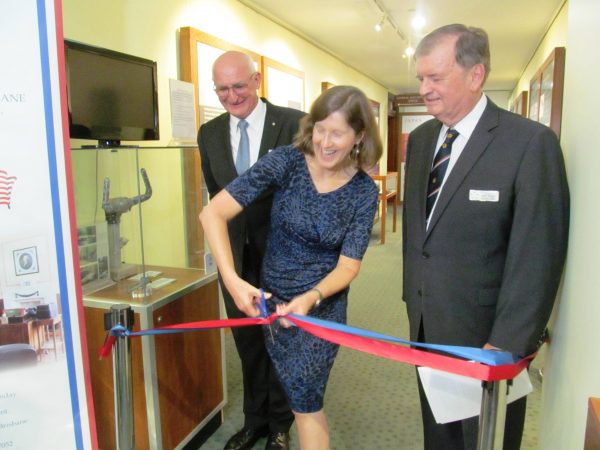 The South West Pacific Gallery was officially opened by Valerie Fowler, Consul General NSW and QLD on 9 Feb 2018.The Gallery comprises examples of cooperation between Australian and US armed forces within the SWPA. These examples include:1. Royal Australian Navy and United States Navy 2. The fight to overcome the threat of Malaria 3. The Battle of Milne Bay (Australian infantry and US engineers 4. The Battle of Bismarck Sea (RAAF and US Army Air Force)The new panel designs will allow the Museum to plan a rotation of displays and this will mean that there will always be something new to see.

Ask Us About Our Next Event

Friday July 21st - Saturday July 22nd, 2017General MacArthur Arrives in Brisbane 1942The MacArthur Foundation, supported by Brisbane City Council and the Pratt Foundation, commemorated the 75th Anniversary of the arrival, in Brisbane, of General Douglas MacArthur in July 1942. MacArthur established his Headquarters in the City and controlled all operations undertaken in the Southwest Pacific Area, to defeat the Japanese Imperial Forces.On the evening of Friday the 21th of July, 2017, the second MacArthur Dinner was held at Tattersall’s Club in the city, attended by the Governor-General, His Excellency General the Honourable Sir Peter Cosgrove AK MC (Rtd).On Saturday 22 July 2017, a "festival of music of the 1940s" was held at the centre stage, Queen Street Mall. Bands included the RAN Band, Andrews Sisters Tribute Band, Brisbane Excelsior Band, Steamboat Jazz Band and Corner Pocket Swing Band.The commemoration also included re-enactment procession through the city. The Lord Mayor of Brisbane, Councillor Graham Quirk, travelled with 'General MacArthur through the City Streets in an original World War Two vintage motor vehicle.The importance of the volunteers to the Museum was mentioned by the Governor-General at the 75th Anniversary Dinner and by the Lord Mayor at the plaque unveiling. Indeed one of the stated purposes of the Lord Mayor’s visit was to meet and thank the volunteers, given the increasing association between the Brisbane City Council and MacArthur Museum Brisbane. 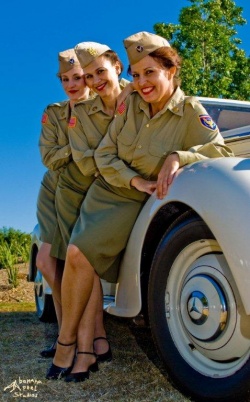 A great big thanks to all those who assisted with the conduct of the 75th Anniversary. Congratulations to everyone involved on a job well done. 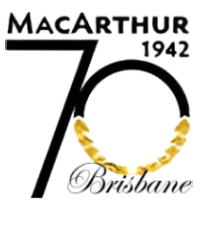 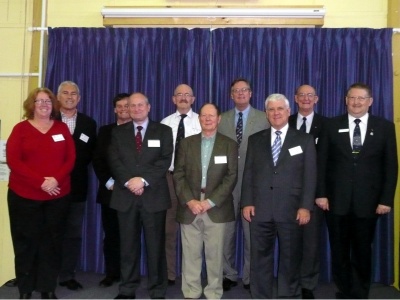 Saturday July 21st, 2012In this 70th anniversary year, the MacArthur Museum Brisbane held a number of events to commemorate the General’s arrival and promote the history of the period.The Inaugural MacArthur Dinner On the evening of Friday the 20th of July, 2012, the Inaugural MacArthur Dinner was held at Tattersall’s Club in the city. The Dinner was a black tie affair with a menu based on the dishes from the famed Four Season’s Restaurant in New York. Incidental period music was provided by Stitched Up Jazz and former Deputy Prime Minister and recent Ambassador to the Vatican, the Hon. Tim Fischer, AC, gave a lively address to the gathering.Seminar – ‘General MacArthur – Agent of Change’ On Saturday the 21st of July, a seminar jointly hosted by the Royal United Service Institute (Queensland) and the MacArthur Museum Brisbane addressed the topic “General MacArthur – Agent of Change”. The seminar examined MacArthur’s influence across a wide range of activities and disciplines including the development of Queensland railways, public relations in Australia, the Japanese communications industry, naval and air warfare and health and hospitals in Brisbane. The keynote address was delivered by noted

Back to Brisbane in the War On Saturday the 21st of July, the MacArthur Museum Brisbane hosted a Back to Brisbane in the War day on King George Square in the city. The event featured historical and re-enactment groups providing displays and activities with a forties wartime theme. Military vehicles and equipment were there, along with a range of other attractions to interest grandparents, parents and children. Our visitors could see the fashions that were all the rage at the time and try their hand (and feet) at learning how to jitterbug. During the day the Square rocked to the sound of big band recitals playing swing era music. Walking tours of the City's World War Two landmarks were also available.The MacArthur Museum Brisbane, on the 8th Floor of MacArthur Chambers, on the corner of Queen and Edward Streets was open all day until 4 pm.